The Launch X431 V+ is an updated version of the popular X431 V Launch scan tool. The V+ offers all the same features as the X431, but throws in some interesting upgrades such as SCN coding, that cement the X431 V+ as one of the top diagnostic scan tools on the market.

The Launch X431 is truly packed with features and diagnostic functions. Whether you want to clear error codes, or run tests on ABS, SRS and SAS systems, this scan tool will be able to help you. In this review, we’ll talk about the X431 V+ and help you decide whether this is the right scan tool for you and your workshop.

First, the review will give a rough overview of the product before looking at some of its key features more closely. Finally, we’ll give our own verdict about the Launch X431 V+ at the end of the review.

The Launch X431 V+ is a full system diagnostic tool, designed to be used within the professional repair shop. A full system diagnostic tool is one that can run diagnostics across all vehicle systems and electronics. For example, the device can run a scan on the Anti Lock Braking System (ABS), and quickly report back on whether there are any issues with the ABS. Using a scanner in this way saves a lot of valuable repair time. The Launch X431 V+ also runs scans on systems such as the SRS airbags and SAS (Steering and suspension system).

The scan tool automatically recognises your vehicle make and model as soon as the scanner is connected. This is thanks to the Launch X431 V+’s auto VIN technology, which reads your vehicle’s VIN code and immediately knows which car model it is dealing with. Again, this saves time and is just one more thing you don’t have to worry about during a complex repair.

The scanner includes a variety of useful service tools to make servicing a breeze in the workshop. For example, the scanner can run an Oil Reset function, which turns the change oil warning light off when you’ve finished a repair. It also has similar features for engine and tire pressure warning lights. Other commonly used functions include ABS bleeding and the clearing of particulates from the DPF filter. The common idea behind all these functions is to save the mechanic time and money.

A fantastic feature of this particular scan tool is its ability to affect the ECU Coding of your vehicles. You can reprogram parts of the computer’s CPU using this function. There are a few reasons why you might need to use ECU Coding. The first is when you’ve changed some of the vehicle actuators, and need the CPU to recognise the new ones. Another reason is that you might want to recode the CPU is for general tuning of a customer’s vehicle. Whatever your reason, the ECU coding function is very easy to use.

The Launch X431 V+ also has an Active Test function and is a Bi-Directional scan tool. This means the scanner can send data to and receive information from the vehicle. This enables the scanner to run active tests by commanding a specific response from the vehicle. For example you can test how the actuators respond when told to do something by the scanner. This can also be used to tune and reinitialise vehicle systems.

This diagnostic scanner runs on an Android operating system, specifically Android 9.0. This up to date OS makes the device extremely easy to use: Android are known for their powerful yet intuitive operating systems and make software for thousands of different smartphones, tablets and devices around the world. The Launch X431 V+ is itself a tablet, and has a 10.1 inch, 1920×1200 touch screen. The touch screen means all functions can be completed with a simple tap on the screen, and the screen itself is responsive and frustration-free. The software is powered by a Snapdragon 450, 8-core processor, and the scan tool really demonstrates the power of this processor.

The Android system is easy to update, and Launch include 2 years of free updates, which bring bug fixes and add new vehicles to the coverage. Having 2 years of updates included with the purchase is a nice inclusion, and will ensure that the Launch X431 pro won’t become obsolete soon after you buy it.

Being a tablet, this scan tool includes both a front facing camera and a rear facing one. The front camera is 5MP and the rear is 8MP. These cameras are useful for taking photos of broken car parts for later reference, or to upload to a car manufacturer’s customer service team for extra help. The Launch X431 V+ has a 7000mAh rechargeable lithium battery which provides more than enough battery life for a full day of work. The scanner can operate in temperatures between 0 and 45 degrees celcius, and can be stored between -10 and 45 degrees celcius, so you don’t need to worry about leaving the scan tool in the cold workshop overnight.

The X431 V+’s touch screen is surrounded by a durable plastic housing to help protect the device. There’s no need to worry if you drop this scanner, it will most likely survive any height of drop. The housing also helps provide a better grip on the scan tool, again reducing the risk of dropping the device. The Launch X431 pro V+ also has a 32GB storage capacity which is sued to store vehicle information to print off later, or for future reference when fixing similar vehicles.

Overall the Launch X431 V+ offers a great set of features at its price point.

An important thing to consider when choosing a diagnostic tool or OBD2 scanner is its level of vehicle coverage. Having a large range of compatibility with different car manufacturers is essential given that most mechanics will be working with a variety of different cars throughout the day. You never know what’s going to drive into the workshop next!

The Launch X431 V+ has extensive compatibility, covering around 90 different car brands from the US, European and Asian car markets. The Launch pro X431 will definitely have you covered, whatever vehicle you are faced with fixing.

The Launch X431 pro V+ does all the classic OBD2 functions, and it does them well. But it also has a few features that you might not typically expect that helps it stand out from the crowd.

One of the great features of the Launch X431 pro V+ is its Active Testing capabilities. Active Testing means that the scan tool can send its own information to the vehicle as well as receive it, and consequently you can control car functions directly from the tablet. This is great for testing out vehicle functions without using the vehicle’s own controls. This allows the mechanic to see if the issue is with the controls or the actual vehicle system.

The Active Testing can be used to investigate the Powertrain Control Module for example, by commanding the module itself to perform functions that the mechanic can then observe to spot any issues.

The Launch X431 V+ lets the user programme a vehicle’s CPU following a repair. It can also add software modifications to the car, if you want to alter how it behaves.

ECU coding is quite a modern development in the automotive world, and provides an alternative to traditional manual tuning. It is done via the OBD2 port and is pretty easy to use with the Launch X431 pro. A couple of examples of how it can be used are to change the chimes on the car, adjust Start/Stop settings, and change how many times the indicators blink.

It’s worth looking into a vehicle’s warranty before performing any recoding, as for some brands you may get a void of guarantees. This isn’t always the case though and for many car makes it shouldn’t be a problem.

The OBD2 service functions on offer from the X431 Launch pro scanner are pretty impressive. Aside from the typical functions that you might expect, such as oil reset, there are plenty of others that are great additions to this diagnostic tool.

A good example of this is the SAS reset function. Using this feature, the mechanic can perform steering angle sensor calibration. You can also prepare the ABS system for bleeding to remove trapped air from the system.

Another function that can be made use of is the Gear Learn function. This allows you to perform gear learning for the car when the engine ECU or the crankshaft flywheel have been changed or replaced.

The variety of service functions that this scan tool can perform is impressive, and is one of the big selling points of this scan tool.

The Android 9.0 operating system that runs on the Launch X431 V+ really takes the scanner’s functionality to the next level. It is fast and accurate, and everything can be done with a simple tap on the large, 10.1 inch touch screen.

The other advantage of an Android system is that it is regularly updated, so it will always be running smoothly. These updates are complimented by Launch’s own regular updates, which are free for 2 years. These updates include bug fixes and add more vehicles to the compatibility list, ensuring that the device doesn’t go out of date for those two years.

ECU Coding allows the mechanic to customise their vehicles in an easy and quick way. A great feature of the Launch X431 V+.

The Launch X431 V+ has excellent compatibility. Its coverage of vehicles from across different world markets is impressive. Specifically, the X431 V pro is compatible with around 90 different car brands.

Finally, the Android operating system makes the device simple and frustration free. When it’s paired with the excellent touch screen, you have a scan tool that handles like a top end tablet or smartphone.

In conclusion, the Launch X431 V+ is a high end diagnostic tool with great functionality and an intuitive and effective design for daily use. The bottom line is that we definitely recommend this scanner, especially at its competitive price point. You can’t go wrong with this code reader, key programming, data stream capable and general high functioning tablet scanner.

The Launch X431 V+ is an excellent diagnostic scan tool, and we rated highly in our review above. At its price point the Launch X431 definitely a great option for your workshop.

Which is better Launch VS Autel?

Autel and Launch are both fantastic producers of great diagnostic tools at a variety of different price points. We wouldn’t say one is better than the other, but each might be more suited for your specific needs. 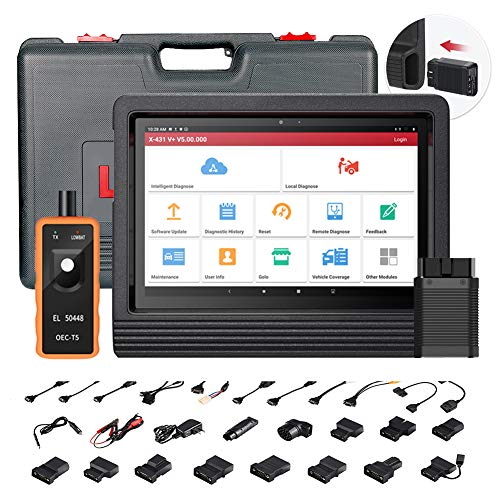 4.5 / 5
It is one of the popular brands considered as a diagnostic tool for vehicles.
Check Price at Amazon